Commissions and art purchases may still be made by contacting Leslie directly.

Arty Parties may be booked to come to your home.

Adult lessons are continuing on Tuesdays at Leslie’s studio in Hamilton North.

Finite Gallery is closing its doors on 10th September 2022

After 9 and a half years (7 in the current location) Finite Gallery is coming to an end.

Thankyou to everyone who has helped to make the years so interesting and very rewarding. I have made so many friendships, and I will miss you all so very much! I am having a hard time dealing with it all at the moment – more words later.

Please call in and say goodbye before I leave – the kettle will be on.

There will be NO School Holiday workshops at Finite Gallery during the July break, but you can get a Take Home Workshop instead!

Take Home Workshops are $30 each and come with materials and directions to complete a creative project at home.

The gallery will be open as usual on Friday, Saturday and Sunday from 10am to 4pm.

Call in to view the range of packs.

10am – noon: Paint a Masterpiece

Finite gallery is excited to be hosting the ‘Familiart’ exhibition during February.

From The Gallery Director:

I imagine it’s not often that a Family Tree accompanies the artist biographies, but for Familiart it was essential to the understanding of the group of diverse artists coming together for this exhibition. Eight artists with very different practices, of different ages and from different locations, yet all tied by the bond of family. I think this brings something unique to the exhibition. I’m sure you will agree.

The exhibiting artists are:

Robert has lived in Lake Macquarie for over 50 years, and is a keen artist in watercolours and pastels, using his wide travels for inspiration. He is a keen (or tragic) Newcastle Jets and West Bromwich Albion supporter who has followed both teams through thick and (mostly) thin. Robert is a life member of the Newcastle & Lake Macquarie Art Society and enjoys a glass of wine whilst recounting past soccer or cricket glories to his grandchildren. 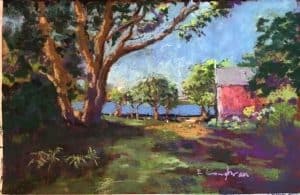 Julia is a primary school teacher who does quilting and cross-stitch as a way to unwind at the end of a long day at the smartboard. She lives in the picturesque south coast town of Narooma, where she enjoys swimming and gains inspiration from the beautiful natural area in which she lives. 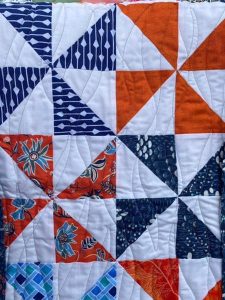 Catherine White is a Jewellery designer/maker residing in Warners Bay NSW.Her statement pieces reflect her love of nature, drawing inspiration from the repetitive patterns and textures found in her surrounds. Her works have an industrial yet sculptural form creating functional and tactile pieces for the wearer, being made predominantly of sterling silver and semi -precious gemstones. 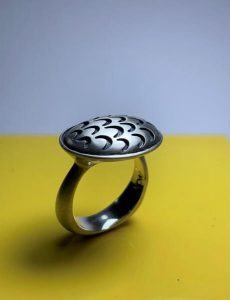 Vicki grew up in Taree NSW, & after school left to study Graphic Design at Randwick Technical College. After pursuing a career in Advertising & Corporate Design, she returned to study Fine Art & is a graduate from The College of Fine Art UNSW (now UNSW Art & Design), completing a Bachelor of Fine Art & Master of Art in Painting & Drawing in the 1990’s. She has been involved in Artist Run Initiatives, participates in group shows & self initiated projects, has been a finalist in numerous art awards including the Doug Moran National Portrait Prize, Portia Geach Memorial Award, The Blake Prize, The Tattersalls Landscape Prize, Fishers Ghost & Eutick Memorial Still Life Award, & has won a number of awards & commendations. She has also worked as an Art Tutor in Aged Care, Mental Health & Childrens’ community services. White works in Sydney & Taree. Her evolving practice includes painting, video & photography, & considers the notion of landscape as a ‘living source of wisdom, beauty & transformative power”. She’s interested in how pictures can convey feelings & embody memories, through our shared experiences of joy, elation, longing, loss & melancholy. The intimate nature of her work is drawn from her own personal story & that of those close to her, but in essence become universal stories, as she invites the viewer to inhabit the psychological space within the images, & to contemplate the references to the delicate shifts & balances of the human condition. 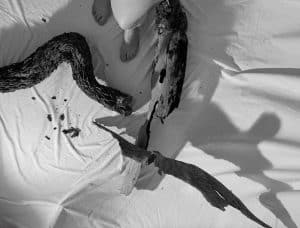 Eric’s practice his born of his 32 years participation in The Australian media landscape as a political cartoonist and opinion page illustrator on The Australian newspaper. Since 2016 he has completed a Masters of Fine art by coursework at UNSW Art & Design, followed up with a 2 year, Full time Masters of Fine Art research paper on the topic of Disrupting the Cartoonist working model for the digital paradigm. This allowed him to continue his painting practice and conflate his inquiry with traditional painting and time based digital painting, to exhibit his work most recently, within a cultural institution, The Museum of Australian Democracy, Old Parliament House Canberra and within a fine Art Gallery context, Stella Downer Fine art gallery 2020. Sydney based artist, Eric Löbbecke, born in Vienna Austria 1966. His family migrated to Australia in 1973, French mother and German father. Finalist in the Dobell drawing prize, Walkley award winning Cartoonist/illustrator on the Australian newspaper since 1988 with three solo shows at NG ART gallery Sydney, and twice showing with another artist in The Holland park Icehouse gallery, London. His work allows a heuristic process to take place with the influence of a gestaltist framework to make additive work in its construction. Open to serendipity and collaboration, the Random Thoughts are easily rendered relying on a visual lexicon practised over many years constrained by media deadlines and a methodology underpinning by foundations for developing narratives contained within his work. “Mother Moon is my visual response, watching my mother inconsolable, diagnosed with a terminable illness and couldn’t tell me, knowing I was going overseas in my early twenties.” 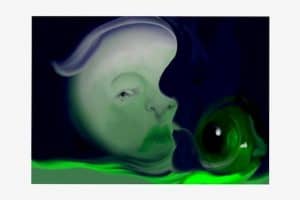 Shannon is a primary teacher living in Newcastle. She grew up in Laurieton and was always drawing house plans growing up. In 2020, she moved to Wickham to a terrace house and noticed on her many walks around the area that the houses were so unlike the next one that sat beside it. As well as this, she had always noticed that at her Nannas house on the top of the fridge, was a black and white painted tile of a terrace house, quite like the one she had moved into. Her Nanna had told her that it was the only purchase her late Poppy had bought at the many garage sales she took him to each weekend when garage sales were the ‘it’ thing. She began drawing houses to pass the time throughout lockdowns. Now, Shannon’s friends often ask her to draw their grandparents homes for sentimental gifts as most of these houses were built during the prosperous post war period of the 1950s. When she isn’t teaching she enjoys camping, travelling and the beach. The tile on top of her Nanna’s fridge now resides on a bookshelf in Shannon’s home. 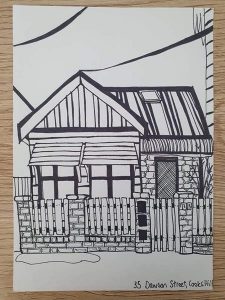 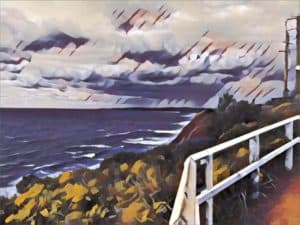 Niamh is in her final year studying Fine Arts at ANU. If Niamh had more spare time she would be a prolific artist, but with studying, part time work and riding her bike to and from lectures she has only been able to devote a little time to her passion of painting. Niamh lives in a creative share house in Canberra which is adorned with multiple artworks. 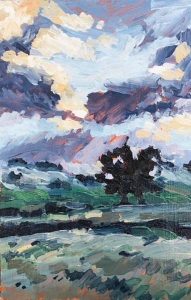 Please join the artists for the Opening Event on Saturday 12th February, from 2-4pm. Current Covid-19 protocols will be in place. 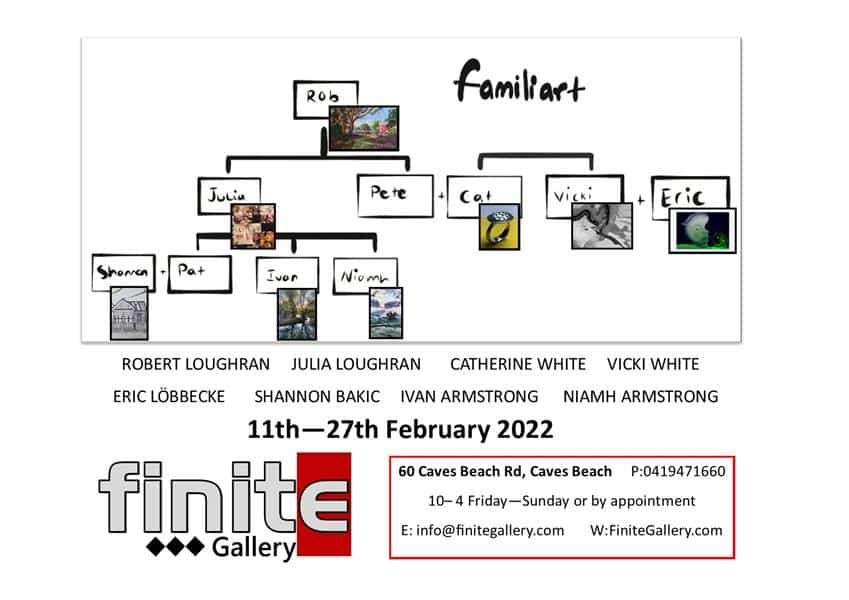 There are lots of workshops for the kids during January, so escape the heat and book them into their favourite workshop! Parents/carers can join in the fun too, so why not make it family activity? Places need to be booked for each participant.

There is also a workshop for the adults on Friday 28th January – Felting with Amanda Donohue. Follow the link for details. 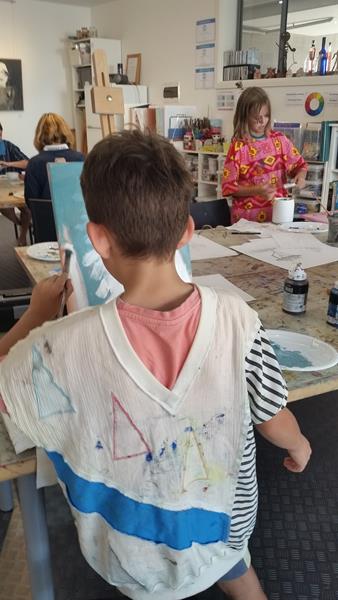 Gift Vouchers may be purchased from the gallery to use for these workshops. Give Leslie a call on 0419471660 to arrange your voucher.
Patchwork 5 Exhibition

Now in its 5th year, the Patchwork 5 exhibition features the work of 70 artists.

Each work is created on a 15cm x 15cm canvas purchased from the gallery so that they are all the same. The artist decides on the subject, medium and the selling price of their work.

The Patchwork exhibition is a great way to start a collection, or for finding a unique gift. Buy one, or buy many! Warning: It is addictive once you start collecting!

The exhibition catalogue will be able to be viewed here on Friday 3rd December at 10am.

Please note: There may be a slight delay in marking items sold on the webpage.

All purchases may be taken from the gallery immediately. A coloured print of the sold work will be displayed, so you can still see the entire exhibition.

Purchases may be made over the phone by calling Leslie at the gallery on 0419471660. Please have your credit card details handy, or alternatively, Leslie will give you bank transfer details. Please note: Sales will not be finalised until transfer is made and receipt sent to the above phone number or emailed to the gallery.
Purchases made over the phone may be posted at the buyers expense.

Adult classes have resumed at Finite Gallery for all fully vaccinated students!

Please book a space, as numbers are strictly limited to allow social distancing.

Masks must be worn indoors.

Looking for something creative for the kids to do in the holidays?

Each pack contains all you need to start creating. There are several to choose from. Why not get a few?

All packs are $30 each. I’m sorry that the website shopping cart is not set up yet. Please email: info@finitegallery.com or call  0419471660 to make a purchase 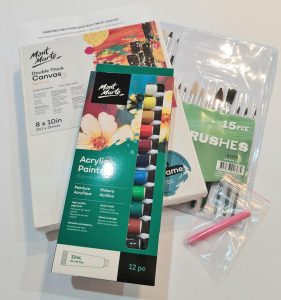 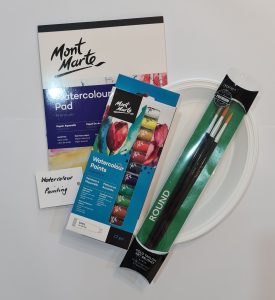 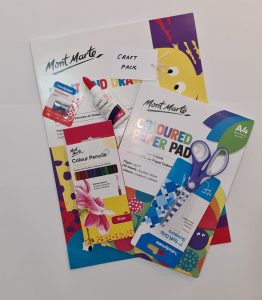 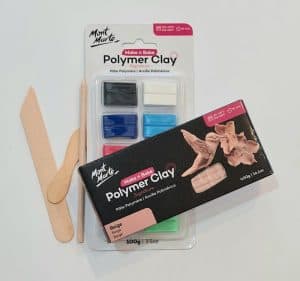 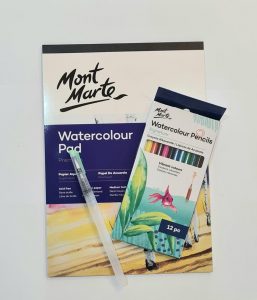 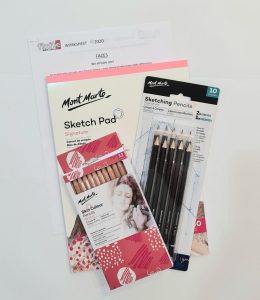 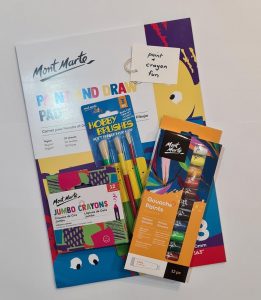 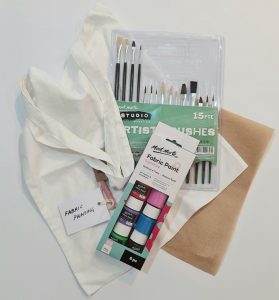 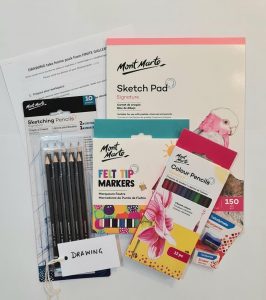 Packs may be collected from Finite Gallery on Saturdays between 10am and noon. Home Delivery can also be arranged.