Peter Ronne lives on a hill in a swamp with his beautiful wife Rose and works in his shed and back garden with tools ranging from chain saws to delicate carving implements.
Presently his practice is concerned with surfaces, the depths being left to philosophers and x-ray technicians. Lately he has been in pursuit of smoothness so as to emphasize the new surface revealed by removing the old one. The grain of the wood, its knots, and ravaged spaces are always a surprise to be worked around and into the piece. The forms he reaches for are the ghosts of archetypes and cartoons. Humour, presence, and moments of attention in a world of anxious chatter, these are hopefully what the carvings may achieve. A hint of practicality enters through the flattish tops of some, where drinks or flower pots may be left to linger.
For years he worked in stone which is heavy and produces an abrasive powder. Wood is lighter and having been alive carries an echo of that life with it. Stone needed to have its story pounded into it whereas wood carries so much of the story on its own. As always there is dust, but it is redolent and doesn’t scratch spectacles.

About these pieces:
The Guardians 1 & 2 are named for their apparent posture and anonymity. One cannot really tell who they are, but they stand ready in case of emergency.
The Money Changer is changing money, in this case a handful of New Zealand coins into a scattering North Korean ones.
So What is a comment on the cult of appearances.
Hunger Bureau is a furnishing for hungers which can be used as a letter (remember them?) holder and drink stand.
Old Man represents an ancient codger content to lean upon his staff.
Song for Odysseus references that song from antiquity which drove a great hero bonkers. 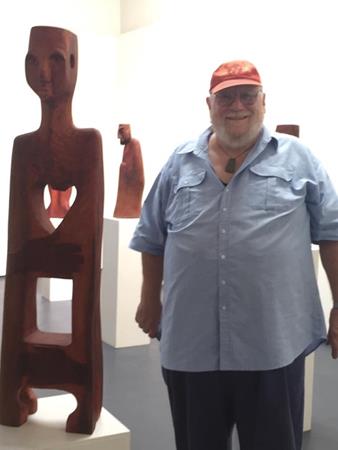